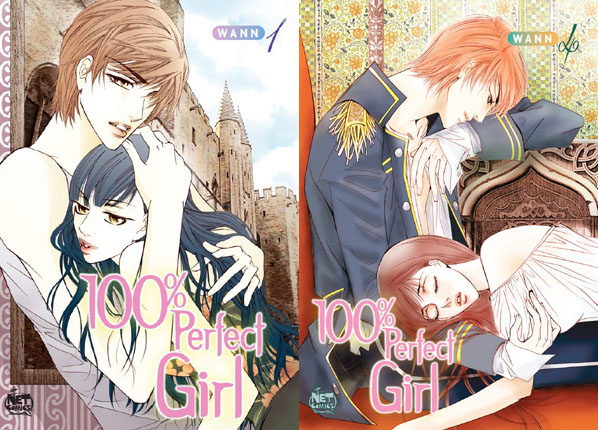 Summary: Jay Jin is the headstrong teenage rebel, determined to prove she’s serious about making art. J. Max is the tall debonair foreigner, in Korea on business, with more–much more–to his background than he lets on. On the surface, it would seem as though Jay and J. have nothing in common… until a chance encounter in a hotel lobby sparks a mysterious attraction. Will true love prove strong enough to overcome the language barrier, not to mention the thousands of miles separating two attractive people? Then there are the interventions of friends and family who think they know best… as well as a disastrous encounter with spicy chicken kebab!

We’re first introduced to our female heroine Jay Jin, an average Korean high school student from a working class family. She has a mother who favors her older brother (who’s a medical student) and focus all her attention and affections towards him. Leaving Jay on the shorter end, she can’t purist her dream of becoming a professional artist, and is told to just have sustainable job and marry someone. Could she really give up and go with the life that’s plan out before her?

As fate would have she meets our male lead Jarte Marx, in the hotel (describes as insanely handsome and also the King of Roinne, a prosperous small country), who instantly infatuated with her and follows her to the countryside. Upon getting off the bus she overhears a commotion, turns out the foreigner Jarte Marx has no money on him to pay for his cab fare and is unable to communicate, Jay whose family runs a home stay is able to speak on his behalf and kindly pays for him. She offers him chicken kebab and Jarte is nearly killed by an allergic reaction. What will happen from here on? Read here to find out

This manga was recommended by giginka. At first the manga appears to the typical Cinderella story where the female heroine falls in love with the handsome Prince and lives a happy blissful life together. However it’s not your typical Cinderella story, although the story theme is based on romance, the manga explores some dark themes such as semi-rape, betrayal, revenge, Mafia, kidnappings, assassinations, attempted suicide, murder, and violent relationships.

At first Jarte comes off as obsessive and possessive lover, but as the story develops the reader get an insight into why he is the way he is. By all means it doesn’t mean I agree with Jarte actions, like giginka said about the manga, “he wants posses her, both body and soul. He wants to have her burn in his skin. He can just swallow her entire person by his kiss, and it will not be enough….” this describes the extent of his possessive and obsessiveness. He might be a Prince but his only human, doesn’t automatically mean he has no flaws.

Jay Jin on the other hand I thought her reaction to Jarte marriage proposal was quite realistic. A handsome prince proposes to you, doesn’t mean you have to agree because it’s too surreal and a once in a lifetime opportunity, she rejects him not knowing whether she loves him. I condemn her for this because not everyone can shy away from temptation.

You know there’s a saying don’t judge a book by its cover? Well don’t judge a manga by its cover. I think it’s interesting that the author doesn’t focus on the brighter things in life and tries to emphasis on the realistic aspect that could happen in a relationship. And meeting a Prince doesn’t guarantee you happiness, the characters in the manga may not be realistic but the topics and issues they explore definitely is.